Buddhism represented in the earliest day as compared to other religions. While people in the north follow Mahayana Buddhism, people in Mekong Delta follow Theravada school. 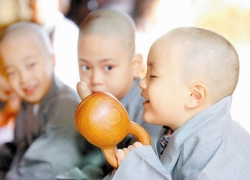 Buddhism plays important role in spiritual life of people in Mekong Delta. Pagodas and temples are the centers of religious and cultural of community. Up to December 2011, there have been 454 pagodas and 8574 monks. Buddhist teachings have become the social norms, leading people to the Truth and the Goodness. Especially, Khmer people in Mekong Delta rule that every boy at the age of 12 – 13 will live religious life in the pagoda for at least one month. There are many Buddhist festivals and ceremonies in Mekong Delta such as: Buddha’s birthday, Chol Chnam Thnay, Donta which enrich the religion as well as the culture of Mekong Delta.

Hoa Hao is the second most influenced religion in Mekong Delta with nearly 1.5 million followers (according to the census in 2009). Hoa Hao religion...

Established in 1929, Cao Dai in Vietnamese means "at the high position". As compared to Buddhism or Catholic, Cao Dai is a new religion with more...