Christianity is the latest religion in Cambodia. Being introduced in the country in the 19th century during the French colonization, Christianity though has little influence in Cambodian’s life with only 20,000 followers taking up 0,15% the total population. 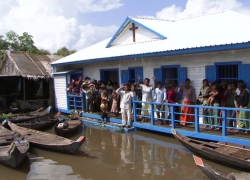 Buddhism has been the dominant religion in Cambodia for centuries. Having existed since the 5th century; nowadays, Buddhism is the official religion...

Islam is the religion of Cham people and a small group of Malay in Cambodia. Cham people densely populate along the Mekong River in Kampong Cham and...