Islam is the religion of Cham people and a small group of Malay in Cambodia. Cham people densely populate along the Mekong River in Kampong Cham and follow Sunni Islam. There are about 300,000 Islam followers in Cambodia. 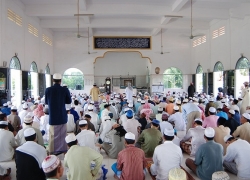 Cham people had built up quite strong basics until it is eroded under Khmer Rouge Regime. Until 1980s, Islam had not regained its former strength. Nowadays, there are about 100 mosques under the control of a five-member council. Each Muslim community is led by a hakem who carry out religious rituals and lead prayers. The Chroyu Changvar near Phnom Penh is the religious centre of Islam Community in the kingdom. Islam community with specific beliefs, rituals and practice contribute to enrich the cultural and religious diversity of Cambodia.

Buddhism has been the dominant religion in Cambodia for centuries. Having existed since the 5th century; nowadays, Buddhism is the official religion...

Christianity is the latest religion in Cambodia. Being introduced in the country in the 19th century during the French colonization, Christianity...