First of all, the "Culture of Orchards" is the unique work of people in Mekong Delta in reclamation of this fertile land. Regardless of harsh nature, people have had strong determination of deal with as well as improve the nature. 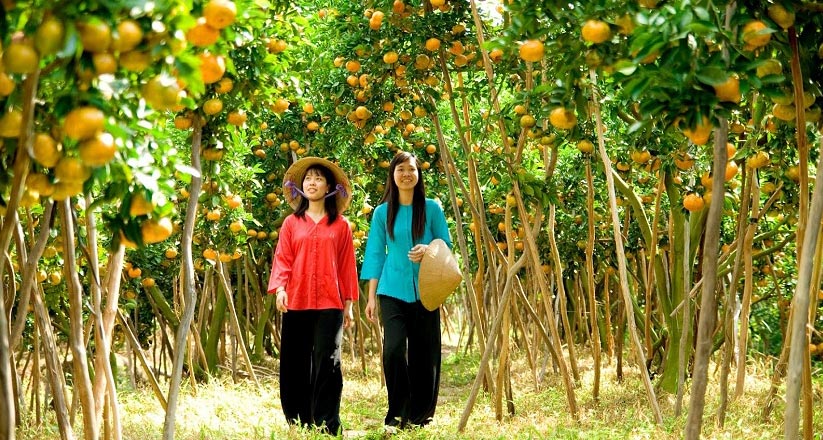 To avoid flood of Mekong Water in flood season, people have reclaimed and formed vast garden on the dry and fertile land. The hard work together with the creation of people in Mekong Delta have brought lush garden all around the year with high economic value. Orchards of mangoes, avocadoes, durians, plums, mandarins, and oranges on the riverbank of Hau River or Tien River in Vinh Long, My Tho and Can Tho have become the symbol of prosperous material life and rich spiritual life of Mekong Delta. These orchards are dream of people in other areas due to its superiority: girls living in orchard are more ingenious and resourceful girl, more intellectual people, more delicious and diverse cuisine. In a long time, Ben Tre and Can Tho have become the representatives of “Culture of Orchards”. Many poems and folk-songs have praised the wealth, the delicacies, and generosity of people here. “Garden Culture” is not only the pride of locals but also the attraction of this beautiful land. It not only brings economic value but also spiritual value, contributing to enrich the cultural identity of Mekong Delta in particular and Vietnam in general.

Cai Luong is an art performance originating and developing in Mekong Delta. Cai Luong (literal translated as reformed opera) is a form of modern folk...

In addition, talking about Mekong Delta without mentioning the influence of Mekong River on the culture here is such a shortcoming. Hundreds year of...