Festival of Light in Thailand

Named as Loi Krathong in Thai language, Festival of Light is the most romantic festival in Thailand. As its name, this sparkling takes place in the evening on the river. On this day, Thai people will float krathongs - lotus shaped vessels nicely and glamorously decorated with flowers and lightened by candles. 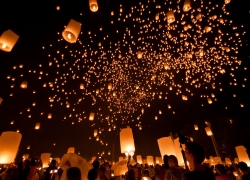 The water surface suddenly becomes a brilliant and twinkling theater of candles and flowers. Thai people celebrate Festival of Light as a thanksgiving and worshipping to the Goddess Water for giving them abundant source of water and marine. Festival of Light is widely celebrated in provinces that Mekong River flows through but magnificently held in Sukhothai and Chiang Mai.

The New Year Day in celebrated in nationwide. On the first day of the year, big cities like Bangkok and Phukhet, and major provinces along Mekong...

Bo Sang Umbrella Fair & Sankamphaeng Handicrafts Festival are among the most unique of community living along Mekong River. These two characterized...

Chiang Mai Flower Festival is one of the most important and frenetic festivals in Thailand. Taking place in 3 days from the first Friday of February,...

In Thailand, April is the most frenetic month in a year. Since the beginning of April, life has become busier as people started preparing for the...

Taking place in Loei Province on the bank of Mekong River for 3 days in the middle of April, Phi Ta Khon Festival is a highlight cultural activity of...

Candle Festival is the most important festival of the Ubon Ratchani - the ending land Mekong River flows through in Thailand. This festival is...

It can be said that boat races is the most popular community-based activity of people living along Mekong River. Traditionally, boat races take place...