Buddhist followers take up a great amount of population of Mekong Delta. As a result, Buddhist activities ebulliently are hold everywhere, among which Goddess of Mercy Festival in Bac Lieu Province is one of the most outstanding ones. 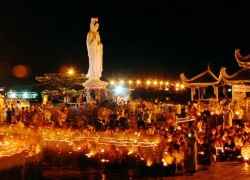 Taking place during three days (from the 22nd to the 24th of the third month in Lunar Calendar) at Nha Mat Ward, Bac Lieu Town, Goddess of Mercy Festival attracts thousands of tourists every year.

Goddess of Mercy statue was built in 1973 and finished in the early of 1975. This 11-meter-high statue standing against the blue sky looking at the Indochina Sea has become a sacred symbol in the belief of Buddhist followers in Mekong Delta.

Since 2013, Buddhist Society started constructing Goddess of Mercy Mountain of 45-meter-high, 90-meter-long and 45-meter-wide with many construction items such as steeple, shrines with the capacity of more than 1,000 people. As finished, this construction will be a work of art imbued with religious and cultural values. It is expected that Goddess of Mercy Mountain will attract millions of pilgrims every year, makong an important religious as well as tourism centre of not only Bac Lieu Province but also the whole Mekong Delta.

During the Goddess of Mercy Festival, there are many festive activities. In the Buddhist ceremony praying for peace, hundreds of monks will chant and carry out sacred rituals and then Buddhist followers start offering incense and praying. Besides, there are worshipping ceremonies departed heroes and people who have greatly contributed to the country, Buddhism teachings seminar. At night, there are many attractive art performances of folk-song singing, dancing or playacting.

Goddess of Mercy Festival is a highlighted Buddhist festival in Bac Lieu. Coming to the festival, besides experiencing sacred Buddhist rituals, tourists will enjoy the beautiful natural scenery of Bac Lieu.