Ha Tien has been known as the second Halong Bay with picturesque sceneries for a long time; however, it is also famous for a specialty: blood cockle. Blood cockle is so popular and famous in Ha Tien that there is a saying: "Coming to Ha Tien without tasting blood cockle is considered as having no sense of this land". 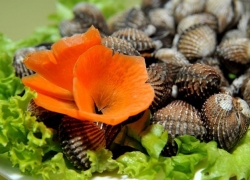 Grilled "climbing" fish in An Giang

Two branches of Mekong Delta have brought An Giang rich and abundant source of fish among which "climbing" fish are the most delicious ones with...

Coconut candy is not only a specialty but also a traditional handcraft product of Ben Tre Province. Food artisans in Ben Tre have created and...

Grilled "Climbing" beef in An Giang

In Tan Chau, An Giang province, there is a specialty with funny name of "climbing beef". It is interesting that "climbing beef" does not mean meat of...

Located in the coastal northern-most area of Vietnam, Ca Mau is endowed with abundant source of food supply from the tropical forests and the sea...

Thanks to abundant swamps on the riverside, people in Ca Mau has gained great benefit from feeding crabs. Crabs in Ca Mau are amazingly available and...

Palmyra sweet soup in An Giang

Thanks to the popularity of Palmyra palm, An Giang people has made a variety of dishes from palmyra: palmyra sugar, palmyra cake, ice palmyra water,...

Vietnamese at least once listen to the song: "Who is standing in the charming posture of a coconut tree Her hair is flying in the breeze?"

Thanks to the abundant source of coconut and marine from Mekong River, people in Ben Tre have created a special and interesting dish: coconut and...

Tam Cake is a popular junk food of many places in Mekong Delta; however; Tam Cake in Ngan Dua Town, Bac Lieu Province is the most delicious. To make...

When Hanoi beef noodles have been known by many foreigners and become the symbol of Vietnamese cuisine, Bac Lieu also has spicy beef noodles with...