Hoa Hao is the second most influenced religion in Mekong Delta with nearly 1.5 million followers (according to the census in 2009). Hoa Hao religion was instituted Tan District, An Giang Province in 1939 by Phu So Huynh. 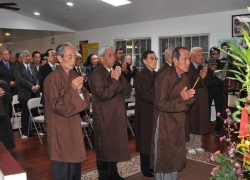 Through more than 70 years of establishing and developing, Hoa Hao religion has advised people to live in harmony and build up the kindness. Hoa Hao encourages its follower to practice Hoa Hao’s teachings at home rather than go to the temples or pagodas. For Hoa Hao followers, it is recommended to raise money for helping the poor rather than build up temples or holding expensive ceremonies. Hoa Hao religion worship Buddha, ancestral and heroes of the country. Even though there is no temple, no statues or ancestral tablets, Hoa Hao is still an important part of people in Mekong Delta’s religious life with the motto: "Buddha in the mind, the mind is Buddha".

Buddhism represented in the earliest day as compared to other religions. While people in the north follow Mahayana Buddhism, people in Mekong Delta...

Established in 1929, Cao Dai in Vietnamese means "at the high position". As compared to Buddhism or Catholic, Cao Dai is a new religion with more...