Lao Loum taking up the majority of Lao’s total population (about 60%) formed and developed the Lowland Lao Society. Having migrated into Laos from the south of China since the first century, Lao Loum populate in flat area along the lower part of Mekong River. 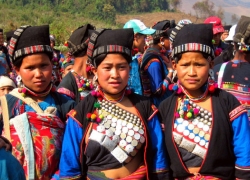 Lao Loem community forms stable and independent villages near the rivers or streams to cultivate rice and other agricultural products on fertile soil here. Each village has approximately 40 to 50 houses and 200 to 300 people, most of which are self-contained. However, Lao Loum keeps nomadic lifestyle; as the fertile land became exhausted or sacred, they would move to another fertile land to settle. This lifestyle is one of the main reasons for soil erosion in Laos which needs changing for sustainable development. Lao Loum prefers nuclear family of a married couple living with their unmarried children. Laotians living in lowlands only keep close connection with family members and people who have blood relation. However, they still share community’s responsibility and actively contribute to the community development. Most of Lao Loum are Buddhist followers; therefore they highly respect Buddhist teachings and believe in power of spirit.

Accounting for 24% of the whole population, Lao Theung is the second major ethnic in Laos. The community of Lao Theung lives in valleys and mountain...

Lao Seung is the community living at the highest place in Laos (regularly over 1000 meters). They mainly populate in the upper basin of Mekong River...