In Laos, the number of Christians only takes up a little amount of the total population (approximately 45,000 people). The community of Christians mainly populate in urban areas and surrounding areas along the Mekong River in the central and the southern of Laos. 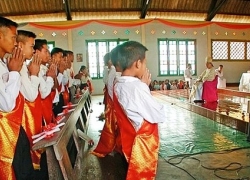 There are five religious centers of Christianity in the whole country: Vientiane, Champassak, Luang Prabang, Savannakhet and Xieng Khouang. Most of Christians are urban citizens in lowland of Laos, some are Hmong And Yao in the highland.

Buddhism was introduced in Laos quite late (in the 8th century). However, it was not until the 14th century did Buddhism develop and widespread in...

Animism is popular religion among ethnic groups living in highland in Laos. The platform of Animism is the belief in phi (spirit). In animist's...

Like Christianity, Muslim is a small minority in Laos and practiced by Cham community. This community only takes up 0.01% of the total population.