Life and Culture along Mekong River in Thailand

As compared to Laos and Cambodia, the influence of Mekong River on Thailand's life and culture can be less obvious and profound. Although only flowing through the eastern and northern part of Thailand, Mekong River plays the vital role in the socio-economic life of six border provinces: Loei, Nong Khai, Nakhon Phanom, Mukdahan, Amnat Charoen and Ubon Ratchathani. 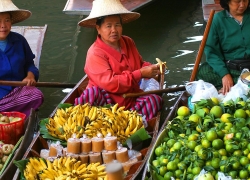 First of all, it can be said that the flow of Mekong River directs and dominates the rhythm of life along itself. Like the seasonal tides of Mekong River, life of Thai living along the riverbank can be divided into two phases. Almost time of the year, life is pretty quiet and calm as the Thai focus on farming crops, fishing is an extra producing activity for higher income. However, from May to June, when the tide is higher, there is amazingly abundant source of fish in the river. Pace of life becomes much busier and more bustling. Thai people get excited about fishing big freshwater fish and even giant freshwater making a lively scenery.

Secondly, Mekong River is also attached with religious activity of residents living along. During the floating season, there are many religious and cultural activities along Mekong River such as Lai Rua Fai event, Floating of Illuminated, Boat Festival. Since the full moon day of the 11th lunar month, people started gathering along the river to witness the most sacred and important events of the year and share joyful time together.

Not only dominating the rhythm of life along itself, Mekong River is also the source of living. The role of Mekong River for residents living along itself is cannot be replaces as it is the most important water supply and fish source. In these people’s belief, Mekong River is like their mother. They love, respect and deify the mother river.

As compared to life in the south and southwest of Thailand with modern cities of Bangkok or Nakhon Si, life along Mekong River is more quiet and calm with well-preserved tradition and custom. Travelling along Mekong River in Thailand, tourists will feel  another face of Thailand – an authentic life of traditional villages and friendly farmers and fishermen.

Overall, life along Mekong River in Thailand is a fresh and authentic array of color  which contribute to complete the overall picture about the mythial river named Mekong.

As coming to Thailand, one of the best ways to have an inner look into Thai cultural value is experiencing traditional Thai art performances. Thai...