The Cham in Cambodia

Ancestor of Cham people are those who set up Champa kingdom in the past. From the 7th to 15th century, the relation between the Cham and the Khmer changed from the allies to enemies many times. 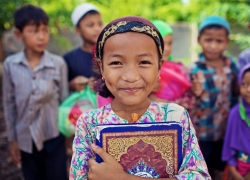 Nowadays, the Cham community has the population of approximately one million and get on well with other ethnics. Cham people mainly populate along Mekong River especially around Kratie, Kampong Cham and Phnom Penh. Like Khmer people, the Cham also live on agriculture. They plant wet rice, feed the castles and fish on Mekong River.  Unlike Cham people in Mekong Delta following traditional Shivaite Hinduism, most Cham people in Cambodia follow Sunni Islam. Cham people in Cambodia have distinguished culture, tradition, lifestyle, beliefs and values which contribute to enrich the national identity of Cambodia.

The Khmer in Cambodia

The ethnic of Khmer is one of the oldest and most affluent in Cambodia. Khmer people have been settling in Cambodia for more than one thousand years...

The Hoa (Chinese descent) in Cambodia

The Hoa is the fattest growing ethnic group in Cambodia. From the 18th to 19th century, Chinese descendants started settling in Cambodia at aim of...

The Vietnamese in Cambodia

With the population of approximately 2 million, the Vietnamese is the largest ethnic minority in Cambodia. The Vietnamese community started...