Buddhism has been the dominant religion in Cambodia for centuries. Having existed since the 5th century; nowadays, Buddhism is the official religion of Khmer people accounting for approximately 95% of the total population. 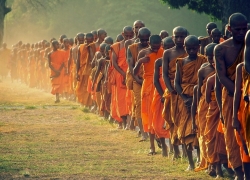 However, unlike in Vietnam, Khmer people in Cambodia follow Theravada Buddhism. Buddhism existed in Cambodia for nearly two thousands years and became the national religion in the 13th century under the Khmer Empire. Despite being suffered from Khmer Rouge regime in the 20th century, Buddhism still survives in Cambodia and shows its more and more importance. Buddhism can be considered as the national identity and culture of this kingdom. For Khmer people, Buddhism teachings have become codes of ethics.  Thanks to the popularity and importance of Buddhism, people in Cambodia, there are many unique and long-standing Buddhism rituals and ceremonies as well as architectural works. Up to now, there have been 4392 pagodas, temples and Buddhist centre over the country that all worth visiting.

Islam is the religion of Cham people and a small group of Malay in Cambodia. Cham people densely populate along the Mekong River in Kampong Cham and...

Christianity is the latest religion in Cambodia. Being introduced in the country in the 19th century during the French colonization, Christianity...