Traditional Costumes of The Cham people in Vietnam

Cham people in Mekong Delta densely populate in An Giang. Cham people have unique and characterized culture which is preserved from generation to generation. 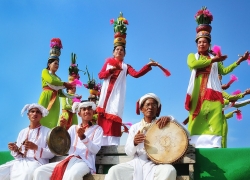 Most of Cham people are Muslim followers; therefore, their traditional costumes are mainly in white.

Interestingly, Cham is the only ethnic in Vietnam that men wear skirt. This special dress is called as “Sarong” outside the long pants. On their heads, there is a characterized hat of Muslim followers with embroidery motifs.

Cham women often wear a scarf around their head and then cover their shoulder in the X-way. Sometimes, they also wear a veil.

Traditional Costumes of the Hoa people in Vietnam

Traditional Costumes of The Khmer people in Vietnam

The Khmer started inhabiting in Mekong Delta since the end of the 17th century. Nowadays, Khmer people mainly populated along Tien River and Hau...

Traditional Costumes of The Kinh people in Vietnam

As compared to Kinh women in the north who is graceful and slender in Ao Dai, women in Mekong Delta are more casual but no less charming. The...